DataHawk Research is a blog series that analyzes the top products in a given category on the Amazon US marketplace and delivers priceless insights on product trends, ratings, reviews, sponsored and more… 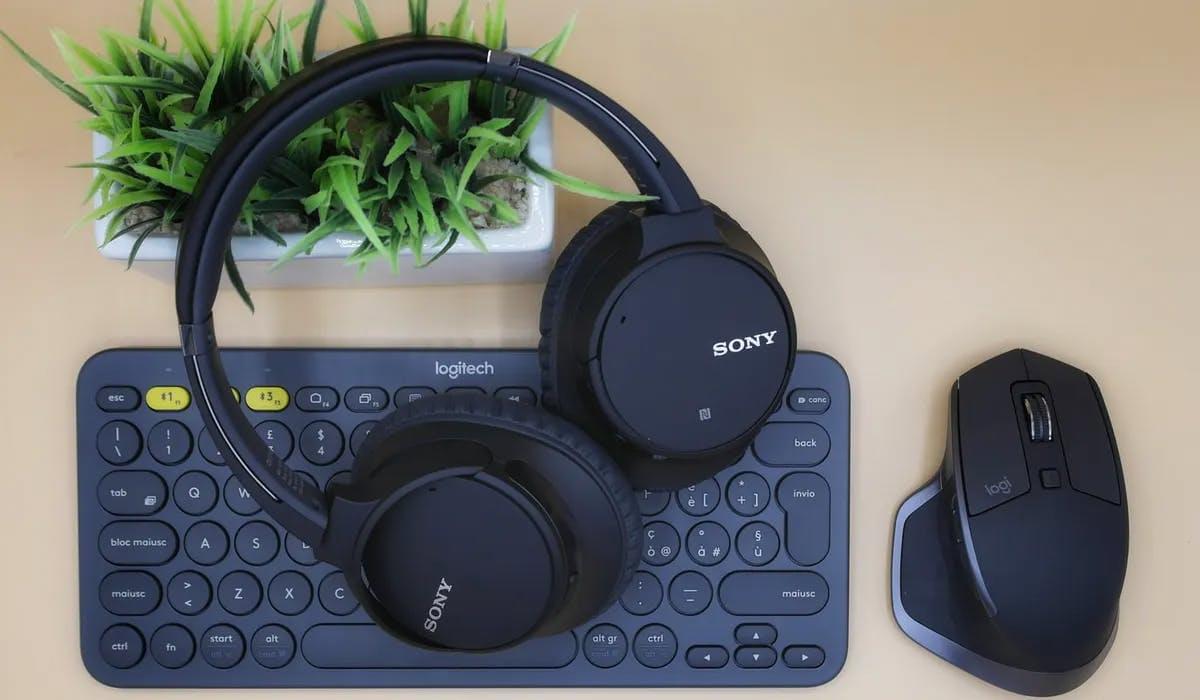 At DataHawk we have analyzed over 59 unique products from 23 brands. The top-performing brands being Amazon and Roku with 18 and 7 products respectively, with Fire TV Stick 4K and Roku Express on top. The average price for the category ” Computers & Accessories “ is 105$ and the average reviews were found to be ☆4.3.

Let us now analyze the category on different parameters. 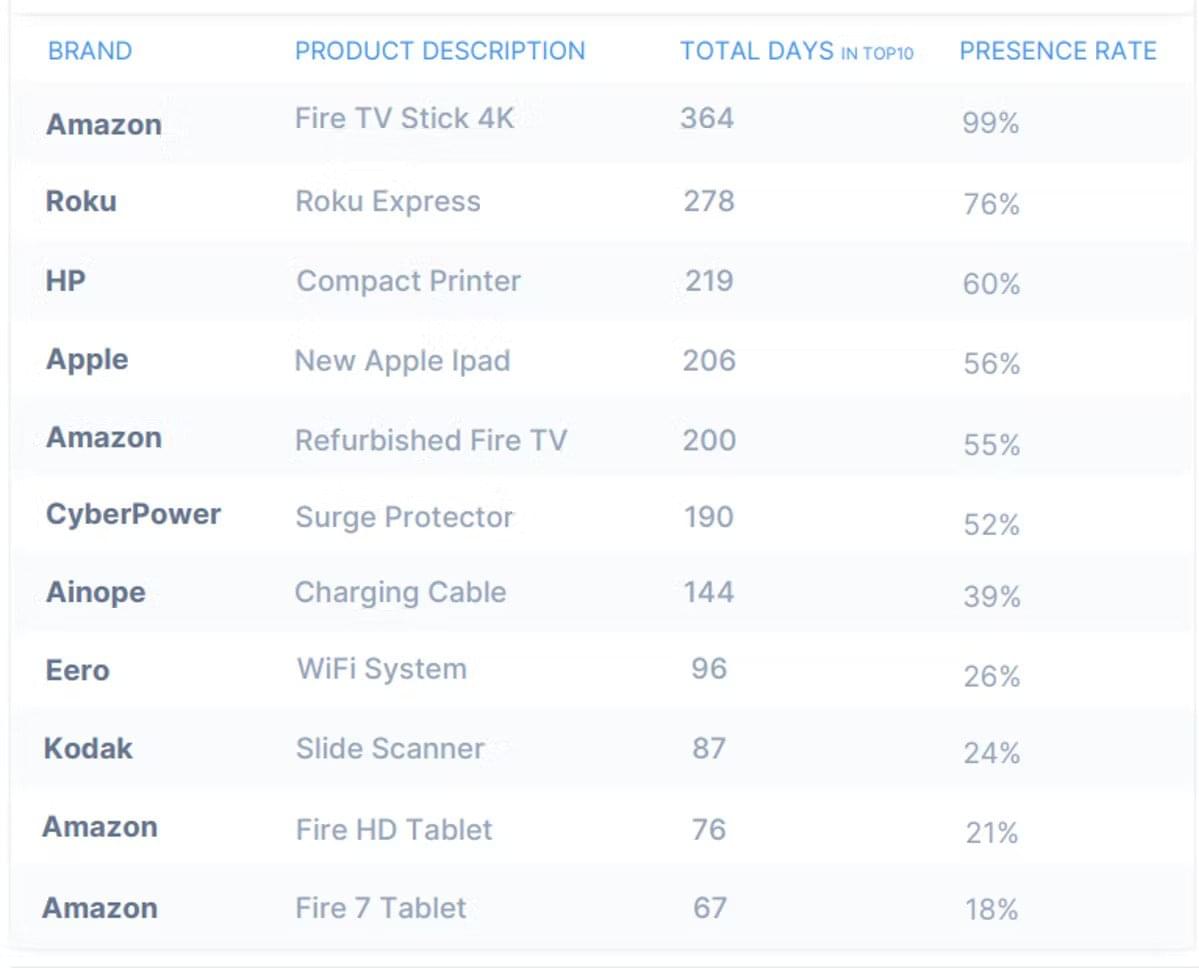 The presence rate is an indicator that measures the time spent by one or more products of a brand in the top 10 of a given category. It is calculated as follows:

10 brands that made it to the Top 10 list for most of the year are represented here from the “Computers & Accessories” category on Amazon, including, Amazon, Roku, HP, Apple, Cyber Power, Ainope, Eero, Kodak & HooToo. Amazon and Roku with 18 and 7 products each are leading the chart by 100% presence rate which means one or more products of these two brands have been in the top 10 in the category “Computers  & Accessories” on Amazon for the whole year. Roku on rank 2 in terms of presence rate with less than half the number of products as Amazon. Clearly Amazon is dominating the category.

Apple is a little low, following with 3 products present for 68.49% time of the year. However, It is striking that 5 brands out of the top 10 have had only 1 product in the top 10 list although all these have been present for not more than 55% of the year.

This section is all about products dominating the Best Seller Ranking:

“Amazon’s Fire TV Stick 4K” is the top product on the list with a presence rate of 99%. It is a $49.99 media streamer that doesn’t represent a sequel to the 1080p Fire TV Stick, but instead completely replaces the 4K-capable Amazon Fire TV. The Fire TV Stick 4K supports Dolby Vision and features a more advanced remote to boot. It is reviewed to be the best media streamer you can buy for under $50.

Second on the list is “Roku Express” by Roku, which has had a presence of 76% of the year which is 278 days. The straight forward approach of Roku for the search results on its platform and the affordable pricing has given Roku a presence just below Amazon.

With over 5,000 “channels,” you’re bound to find everything from top-tier streaming services to niche broadcasting. However, it could be very interesting to see the two competing.

We also monitored that “Surge Protector” by CyberPower ranking on number 6 on the presence rate graph with 190 days (52% of the year ) has a 2,158 rating which is much lower than the last two on the list from Amazon (Amazon Fire HD tablet at 47,933 ratings).

Apple Ipad with a rating of 10,772 and priced the second highest in the list, falls on the 5th position, very close to Cyber Power though.

Let’s now discover which products stayed the longest time in the Best Seller Ranking for “Computers and Accessories” category on Amazon for past one year in detail:

The big winner of the year is the Amazon Fire TV Stick 4k streaming device. With an average BSR of 2, this has a rating of 4.6 out of 5 and is priced at $49.99.(Voted to be the best in the category). Next on the list is Roku Streaming Media Player followed by HP DeskJet Printer.

In fact, Hewlett-Packard’s revenue from printers and copiers reached about 20 billion U.S. dollars in the fiscal year 2019. The printing segment is one of two main business segments of HP Inc. The numbers explain the success story of HP Printers.

The competition for the keyword “Amazon Fire Stick” or “Roku Express” is fierce (at DataHawk, we give it a Keyword Competition score of 38 % and 36% each, meaning it’s really hard to compete for. You could go for a keyword such as “Streaming media players” or “Roku streaming stick” that are long-tail keywords and more competitive and cheaper for your business

Between the first quarters of 2017 and 2019, Roku’s share rose from 37% to 39%, while Amazon’s share climbed from 24% to 30%. With straight forward search results and its price affordability, Roku is winning hearts but Amazon with its recently launched features and diverse streaming services is a tough fight. It is a very interesting battle of two leading Streaming Media Players.

We also analyzed the subcategory of “Computers and Accessories” which is “computers”.

Thanks to the Amazon Keyword tracker, we were able to rank the most sponsored products for any keyword for our given period. We found 504 products that have been sponsored for “Computers” on Amazon US in 2019.

We also analyzed the subcategory of “Computers and Accessories” which is “computers”.

Thanks to the Amazon Keyword tracker, we were able to rank the most sponsored products for any keyword for our given period. We found 504 products that have been sponsored for “Computers” on Amazon US in 2019.

Third and fourth in the search query are “New Apple MacBook Air (13-inch, 8GB RAM, 256GB Storage) – Space Gray sponsored for 50 days and, Lenovo Chromebook C330 2-in-1 Convertible Laptop, sponsored for 42 days which is 11.51% of the year. It is, however, noticeable that the most sponsored product has the lowest reviews, which is 614 much lower than the 1992 reviews of Lenovo Chromebook in the 4th position. 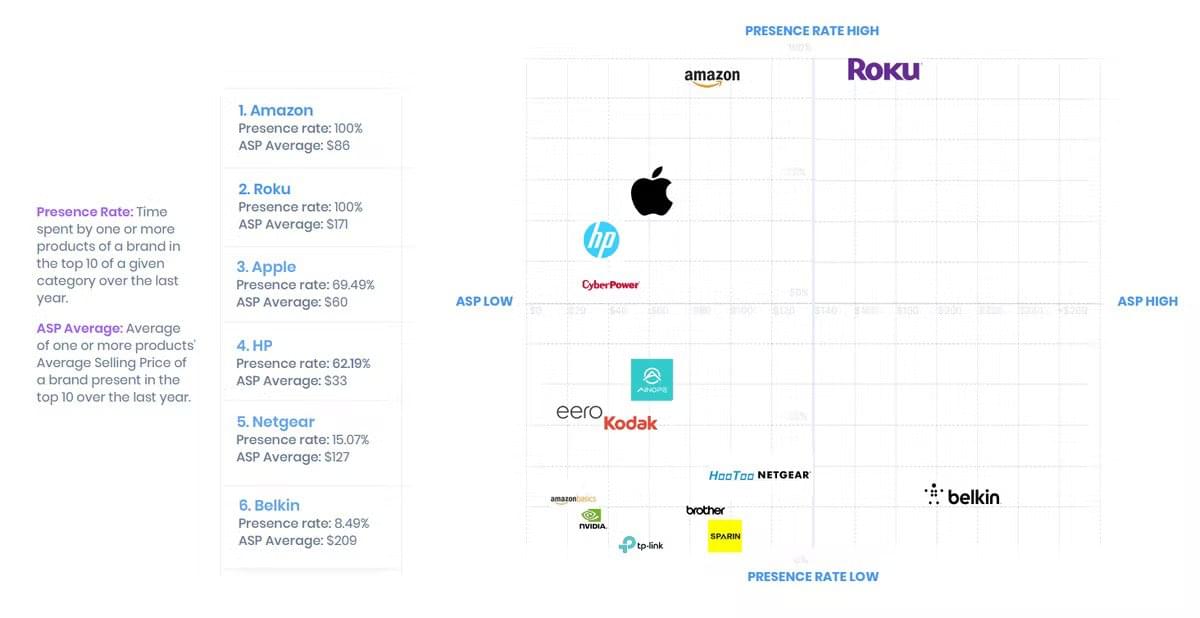 In the last part of our research article, we have presented the performance of brands in terms of their ASP with respect to the Presence Rate.

Apple and HP competing very closely on the presence rate chart have almost 50% difference in their ASP with Apple at $60 and HP at $33.

The average ASP of this category is $105. With the comparisons made on the basis of the Presence Rate, we also see that Apple and HP are competing very closely on the presence rate chart but having almost 50% difference in their ASP with Apple at $60 and HP at $33.

It is also very interesting to see the distance between Amazon and Amazon basics, which are residing in opposite quadrants.

With this analysis, we are also able to determine, which brands are in the closest competition to each other, for example, NETGEAR and HOO TOO, Roku and Amazon, Kodak, Ainope, and eero.

In our study, we looked at the most expensive product, the cheapest one, the product with the highest rating, and the one that had received the fewer reviews but still made it to the top 10.

Let us know how you feel about this episode, and see you soon for more 😉 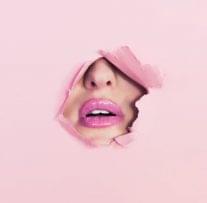 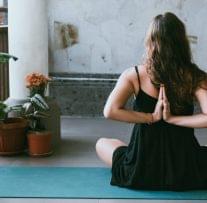 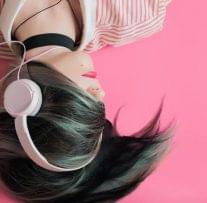